Six of the bills I introduced passed into law this legislative session, which placed me in the top 3 of freshmen Delegates!

As a former school board member, this session I stepped into the role of Delegate on the Committee of Education and made it one of my primary goals to introduce and support bills that increased teacher pay, school funding, and overall Virginia school quality. The ongoing fight this session for a renewed focus on public education has come with some losses and wins. My HB 233 Teacher Salary bill, which sought to raise salaries to meet or exceed the national average by 2025 unfortunately did not make it out of committee but I didn’t leave Richmond empty- handed. I fought for teacher salary increases in every manner I could and I’m happy to report back that our teachers will be receiving a 4% pay increase over the next two years. (2% in the first year of the biennium and 2% in the second year)  As I begin to look forward to next session, the first bill I will introduce will again be a bill to raise Virginia’s teacher compensation to reach  the national average or above. 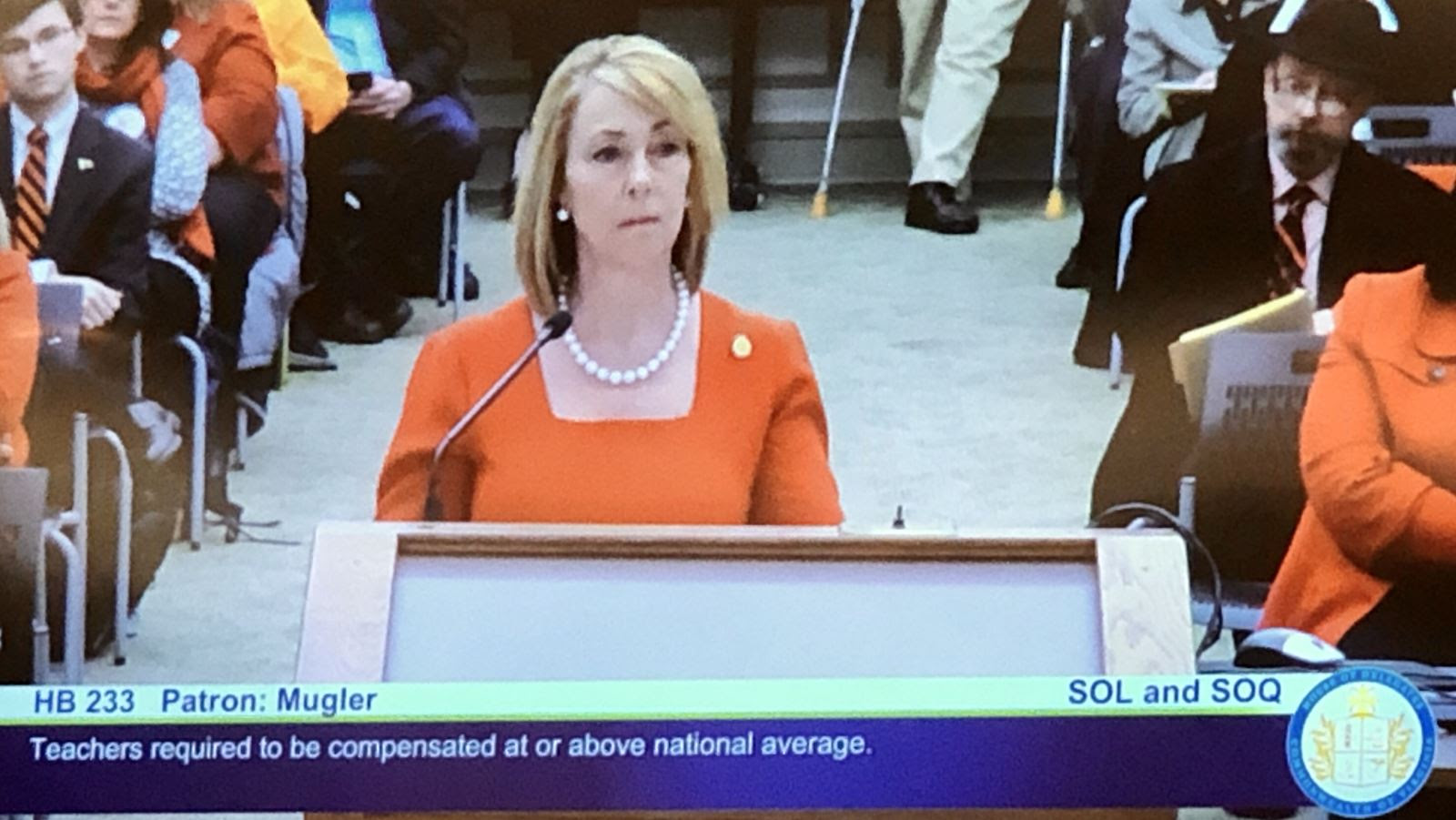 A top legislative priority was to increase teacher pay across Virginia without putting a financial burden on localities and trying to match any state compensation increase. That is why at the beginning of this session I submitted a budget amendment requesting funding and the development of a plan to eliminate the cap of support positions in the Standards of Quality (SOQ) and instead recognize support positions in accordance with the prevailing local practice. The plan would conclude with a schedule for the full elimination of the cap and reaching full funding by the year 2025. This budget amendment did not make into this year’s budget. I remain committed to eliminating our current SOQ cap that puts a financial burden on our local school boards.  Increasing teacher compensation remains my top priority.

The last Wednesday of session, I attended a press conference on HB1316.  I along with 28 other delegates co-patroned this bill which would ensure that schools have the funds to fully implement all recommendations from the Board of Education’s Standards of Quality. Though this bill did not pass, all representatives in support of increased school funding, including myself, want to make it clear that we will continue to fight for this funding and for equal opportunities for every student in every zip code. I want to thank all the educators who reached out to their representatives this session and stood up for their fellow teachers as well as students. I hope you will keep looking forward and join me in our public education efforts in the 2021 session!

$88 Million is currently headed toward early childhood education with $59.5 Million toward the Virginia Preschool Initiative to increase early childhood education access for at-risk four-year-olds. This funding will empower Virginia’s children and I echo the words of Governor Northam, “Every child should have an equal opportunity to build a strong foundation, and early childhood education is one of the best investments we can make in our children’s health, well-being, and future success.”  As a former member of the Downtown Hampton Child Development Center, I know the Governor is on-target with his strident support of our early learners.

Of the bills I co-patroned, HB 1547, pertaining to eligibility for in-state college tuition, was passed into law. This bill is a big win for accessible higher education advocates. It permits students who have attended high school in the Commonwealth for at least two years to qualify for in-state tuition, regardless of immigration status. I am happy to see this pass as I believe that all Virginia residents should have the option of attending a Virginia college at an affordable tuition rate!

Included in this year’s biennial budget is a $53 million increase in state funding that will allow Virginia's public colleges to freeze tuition for in-state students in the coming year, marking the first such move in two decades. In addition to funding for a tuition freeze, the budget also allocates $60.6 million in financial aid for in-state undergraduates and $69 million to implement the G3 Community College initiative.

As the Chair of the Arts Caucus, arts and culture was another focus of mine this legislative session. I introduced a small bill, HB 1431, which expands the number of members on the Art and Architectural Review Board from six to seven. The biennial budget the General Assembly sent to the Governor appropriates approximately $1 per capita towards Art Education and the Arts Community in Virginia. This funding includes $2.5 million in the 1st year and $1.5 million in the 2nd year for the Virginia Commission of the Arts, increases grants to arts organizations across the Commonwealth, and allocates $400,000 in each year for the Virginia Museum of Fine Arts.

I look forward to supporting the growth of the arts both at the state level, in the 91st District, and in our schools!

This session I co-sponsored multiple bills that make Healthcare more affordable and more accessible, including limiting the price of prescriptions and protecting those with pre-existing conditions from being discriminated against by Insurance Companies.

Perhaps one of the most impactful bills I have the honor of co-sponsoring this year was HB66; Health insurance; cost-sharing payments for prescription insulin drugs. This bill introduced by my colleague Delegate Lee Carter prohibits health insurance companies and other carriers from setting an amount exceeding $50 per 30-day supply that a covered person is required to pay at the point of sale in order to receive a covered prescription insulin drug. One of the issues that has been brought up most often to me is the ever rising cost of prescription drugs in Virginia and I was proud to support this bill to bring out-of-pocket insulin prices down for our insulin dependent constituents in Virginia.

Another important health care cost saving measure was to pass a restriction on surprise hospital billing that affects thousands of Virginians each year. These expensive fees often hit patients seeking emergency care at hospitals that are out-of-network, or received treatment from a doctor that was deemed out-of-network at a hospital that was covered by their insurance. Under this law, patients who receive out-of-network care in an emergency can only be charged the in-network rate outlined by their plan. I am happy to have supported this law knowing this will cut down on the amount patients will be charged out-of-pocket for emergency care.

One of my top priorities this session was to pass environmental legislation that provides protection to the Chesapeake Bay. Another win for environmental legislation was the passage of my HB 1609, Nutrient Credit Use Act. This bill protects The Chesapeake Bay from harmful runoff and saves our public utility services money by allowing them to more freely trade nutrient credits.

My Offshore Wind Development bill, HB 234, combats climate change by ensuring a plan for renewable energy development, as well as provides opportunities for economic growth in the Hampton Roads region. Under this legislation, the Virginia Division of Offshore Wind is established and directed to involve all key impact holders to ensure Hampton Roads is the hub of all of Offshore Wind Energy in Virginia, and eventually the entire Eastern Seaboard.  This is a huge step for Virginia, greatly expanding our state’s potential renewable energy production and use!

I was happy to support several other monumental environmental bills, most notably the Virginia Clean Economy Act.  A growing number of Virginians are concerned about our climate, and this Act seeks to address man-made climate change by providing a plan for a transition to 100% renewable energy by 2045. This Act, along with the numerous other companion laws, sets aside funds for renewable energy projects and addresses issues of environmental injustice and coastal resilience, marks a huge step for Virginia’s national role as a leader in environmental legislation!

Bills I carried for the 91st District

I introduced several bills this session pertaining to our district’s localities. HB 731 gives the City of Hampton authority to review special use permitting on ABC licensees when there is a change of management or ownership of the property. Two of my bills, HB 1561 and HB 1608, represent the historic Fort Monroe Authority. HB 1561 grants the Fort Monroe Authority with the ability to handle landlord tenant issues in civil actions with more ease and HB 1608 provides the Authority with exemption from the Virginia Personnel Act.

ERA & Equality for All

This session was paramount in terms of gender equality. On Thursday, January 27th, 2020, Virginia became the 38th state to ratify the Equal Rights Amendment. This is a crucial and unprecedented step for the ERA, as it now has support from ¾ of the states. This amendment is almost 100 years in the making. It has been a long, difficult fight for gender equality. I am so proud to have been a part of the assembly that pushed the ERA forward in the ratification process. By voting to ratify the ERA, the Commonwealth is sending a message of equality to all future Virginians regardless of gender. This is truly an incredible time for women all across the U.S.

In addition to the Equal Right Amendment I was proud to champion two of my colleague’s bills ensuring equality for all Virginians under the law. Delegate Mark Sickles’ bill HB1663 prohibits discrimination based on sexual orientation and gender identity when applying to jobs, public accommodations, housing, and credit. Delegate Nancy Guy’s bill successful repealed the restriction on same-sex marriage in Virginia.

On the last day of the 2020 session The House and The Senate came together to send the most progressive budget in Virginia’s history to the Governor. The state budget delivers on our promise to move Virginia forward. The budget stresses investments of funding in areas of education, workforce development, healthcare, and growing Virginia’s rainy day reserves to the highest level in the history of the Commonwealth. It is the most progressive budget in Virginia history, advancing equality of opportunity across Virginia and protecting Virginia’s AAA bond rating by shoring up our reserves.

While the budget does not increase teacher compensation by 4.5% every year for five years in order to bring teacher salaries up to the National Average as my House Bill 233 called for, it does include a 2% teacher salary increase per year each year of this biennium and is a step in the right direction. The budget makes critical investments in Virginians for today and tomorrow and ensures our teachers, our children, and our workforce are our top priorities.

The House and Senate wanted to ensure that not just teachers, but all State employees receive salary improvements.  The approved budget provides for a 3% Bonus in the first year of the biennium for State employees and a 3% salary increase in the 2nd year of the biennium. State supported local employees receive a 2% bonus in the first year and 3% salary increase in the second year.

JOBS AND THE ECONOMY

Delegate Mugler and Delegate Watts at work on the House Floor

The women Delegates who cosponsored the Equal Rights Amendment